Have you ever seen a classic Mustang VIN number that had a numeric engine code? Me either! Myself and a few other knowledgeable people would instantly say that it’s incorrect or had been stamped incorrectly at some point; but its true…

Lets take a look at the well known and accepted standard VIN for a classic Mustang and break it down:

The Mustang VIN number has a letter within it that identifies the engine that was installed in the car; take for instance the vehicle Identification Number for Project Playboy: Project Playboys VIN: 7R01C186352

All of the engine codes for classic Mustangs are designated by a letter as seen below for the 1965 Mustang model year:

I am working with a client located in Ecuador on his project and requested the VIN number so I could properly identify the engine in his 1965 Mustang, he promptly emailed it over to me for review; you guessed it, it had a number in the position of the engine code. 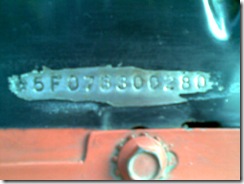 I was a little confused and figured that the VIN was not completely readable or somebody had re-stamped the VIN on the vehicle down in Ecuador, so I requested a photo of the VIN so I could verify the quality of the stamping and the location. I then received the photo and there in the photo clear as day was a ford VIN with a numeral for the engine code.

Once I had solid evidence of the VIN number with its numeric engine code I knew I had a pretty good chance to solve the mystery. I sent the photo of the VIN to Marti Auto Works; they responded and said it is legitimate and correct, the numeric code designation was for a low compression export engine.

2 thoughts on “A Numeric Engine Code on a Mustang?”