My 1967 Mustang Coupe has been through two paint and body shops over the past six months and the results have been disappointing and at times had me feeling like my car was in prison or could be held hostage.

I went to both body shops with high expectation and enthusiasm; both shops new that I would be publishing the progress of their work and promoting their business so I was pretty confident that they would meet their obligation to return a great finished product and receive the advertising, notoriety and recognition they would earn.

L & H (Luke Mau) started out good and aggressive with the project being picked up and media blasted within two weeks and then started on replacing the floor pan and doing some minor welding shortly there after.

Just a few weeks into the project I received a request from a fellow Mustang Enthusiast (Darrel Mayer) to trade out my time slot so his 1965 Mustang Resto-Mod could be completed in time for SEMA 2008; I agreed with the stipulation that my Mustang would be painted in early October just after Darrel’s car came out of paint.

As the October deadline approached, neither mine nor Darrel’s car was any where near ready for paint, with 80% of the work remaining to be done. I began to express my 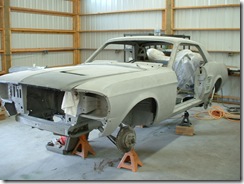 concerns about the progress and the deadline and was told “It doesn’t mater what you think about the progress, what matters is that the job gets done”; wrong it does matter I am the customer. At this point I decided that both projects could potentially end up a catastrophe and I was going to pull my project from the shop and began talking with the next potential shop; brought them out to take a look at the project and bid on the job; the car was pulled from L & H the following day.

All Classic Restoration (Ron and Jeff Carson) stepped up to the plate next; they too started out aggressively and began work within days and projected a completion date of 4-6 weeks. I knew that 4-6 weeks was a pretty short window for this task and I didn’t think they would meet the deadline however, they would put in a concerted effort and would probably have the car just about ready for paint by the end of the duration. 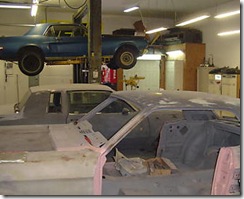 Same old Story; the completion date came and went, the project wasn’t even 50% completed and far from seeing the paint booth. The progress gradually slowed to a near trickle and the next several weeks revolved around getting the paint matched.

There was a pattern emerging between the two shops. Once the deadlines passed I began hearing the whining about how much more work it was than anticipated; and I would agree if more work had been done.. “It’s only more work if you actually do the work!”

I was beginning to get irritated by the lack of progress and the whining about the work and the inability to get the paint matched correctly so I knew it was time to take the ball into my own hands. I made a decision to end the paint match issue by calling the paint supply house myself.

Well I got a match on the first try! Here is the kicker, Mike at Bob’s Paint Land in Vancouver Washington told me that he could mix it but he only had the formula for one brand of paint. So getting this match on the first shot really had me pissed that the body shop never got a sample of this paint as a starting point, this is when I realized I was dealing with another paint and body shop that was using short stir sticks and I decided to make the move to break my project out of this paint shop prison.

I could go on-and-on about the disappointments that led to a paint shop prison scenario; but I was lucky… Darrel’s car is in Paint Shop Prison at L & H Kustoms, is not complete and is being held hostage as a legal negotiation ensues.

The bottom line is both shops failed to complete any portion of my project, both missed there deadlines by a large margin and they both get an “F” in work ethic, craftsmanship, attitude and customer satisfaction; what they lack in ethics they makes up for with his lack of integrity.