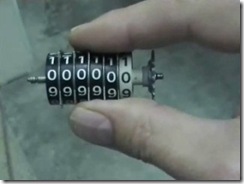 If your doing a classic Mustang restoration you’ve probably thought about resetting your odometer to zero; so how can you achieve this? I’ve read about people using a drill and hooking it up to the odometer and letting it wiz away until they reach the mark, this could potentially take hours. There is an easier way to do this by rolling the odometer back by hand.

This article and video demonstrates the procedure on a 1967-68 Mustang Odometer but should apply to 65-66 Mustang and 69-73 Mustang as well, and the procedures would probably work on a lot of other Muscle Cars from the era. 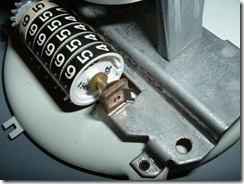 The first step is to remove the instrument gauge cluster form the dash; you’ll need to do this so you can remove the odometer from the speedometer housing. The Odometer is held in place with a spring clip, a very small screw driver and a little nudging will remove the spring clip allowing the odometer to be removed.

When you remove the odometer you will see a series of tabs between each if the digit barrels, these tabs are the piece that keep the numbers in line and in place until the number to its left passes nine. Don’t panic if these tabs and numbers start spinning around as you handle the odometer in preparation for setting it to zero, your going to spin them anyway.

Rolling back the odometer 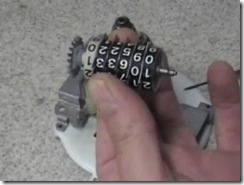 So you’ve taken a good look at your odometer and noticed the rings between each of the digit barrels; each having two tabs exposed. The odometer reading is always between these two tabs and this is where we want to line up all the zeros while conforming to the tab alignment.

The first step is to set the left most number on the odometer to zero; turn the entire assembly until this zero is facing you; don’t worry about the tab position when doing this that will be set next.

With the zero farthest to the left facing you; secure it with your thumb so it stays in this position. Then turn the rest of the assembly away from you until the digits lock in place; unlock the tab between the zero and the number next to it

by turning it toward you until it lock in place. Repeating this procedure will bring the tab around until it is in position where the zero you are holding is between the tabs.

To align the remaining zeros and tabs, repeat the procedures above. Start by bring the next number (working from the left) so the zero is facing you and is lined up with the zero to the left. Now secure both zeros with your thumb and give the rest of the assembly a spin and repeat the tab movement until it’s in line.

Confusing, yes! You should watch the video.

5 thoughts on “How To Reset a Classic Mustang Odometer”