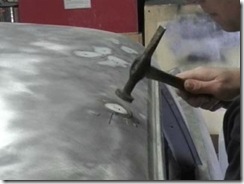 When I took over the job of doing the body work myself I started with a dry build to see how all of the panels lined up then marked and photographed all of the issues.

After that I began my progression toward completing the work that had already be performed in the hopes that I would make quick progress and be able to move onto the doors and fenders that hadn’t been started yet.

I was in for a few surprises and ended up stripping all of the previous work and starting over from ground zero, read more on this at “Can you Trust your Body Shop” 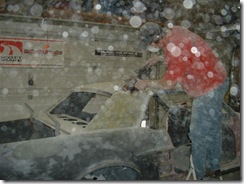 Since my Mustang had already been through media blast all of the old paint had been removed, however I did have to strip off the previous work and remove the primers and body filler that had been applied.

To accomplish this paint and body filler removal I used a sander grinder with 40 and 80 grit sanding discs. This is a really messy process so if you have to do it be ready to do a lot of clean up and floor sweeping. 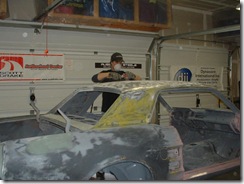 Once the majority of the paint and filler had been removed I sanded the surface smooth with an orbital sander and 80 grit paper. This method smoothes out the panels and will allow you to get a better feel for how flat the surface is. 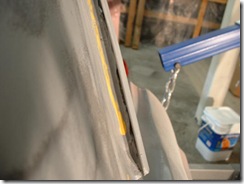 The old drip rail sealer may appear to be in good shape on the surface but trust me, its usually rock hard and most likely has some rust below the surface. The previous body shop made a attempt at removing and replacing the sealer on the drip rails, they did a pretty poor job of application and coverage as sown in the photo, and they could have used the proper sealer. 3M Drip Check is what I used to redo the work, its pliable dries firm and is paintable and you can really get it smooth.

Some dents and rust issues will be very clear and will stand out easily but some of the smaller dent and high spots will not be as visible and will require that you run your hand over the surface to locate them.

The surface is pretty smooth but will most likely have a few spots where the sander/grinder got into the metal and these spots can be deceiving to the bare hand. To assist in locating the smaller areas I use a clean dry shop towel between the palm of my hand and the metal surface, run my hand over the surface and then mark the lows and highs. 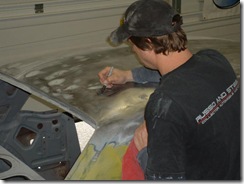 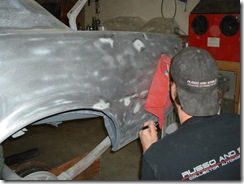 There is are a few techniques to removing dents from your classic Mustang, one of them is demonstrated in the article and video “How to Remove Dents from your Classic Mustang“. I used the dolly and body hammer technique and I also use a stud welder and leverage technique.

Both methods use the same principle as demonstrated in the how to video. The sheet metal has an impact zone (low spot) and a rebound area (high spot); the impact zone gets pressure or leverage applied and the rebound area is tapped with the hammer, check out the video.

A slide hammer is supplied with the stud welder kit but I rarely used it; I preferred to gain a bit more control and used a pair of vice grip pliers and pulled by hand to apply leverage or in some cases I used a 2×4 as the leverage point and leaned the vise grips into the 2×4 thus applying controlled leverage while tapping with the body hammer. 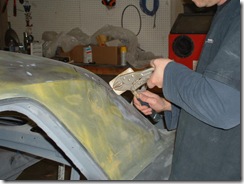 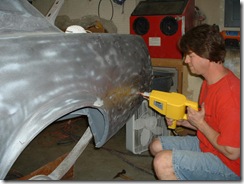 Rust repair – There wasn’t really much to do on Project Playboy other than the floor pan that was completely replaced, and the battery apron which is typical. But I can share with you a little bit of information and technique that I learned from watching the welding; Take your time, don’t try to weld a seem in one pass, small spots at a time no more than a half an inch, then let it cool a bit before you do the next half inch. Your after short bursts of welding, this will keep your surrounding sheet metal from warping to the point of having to do it over again. 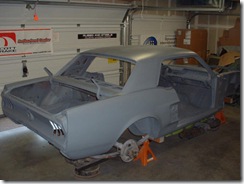 Once all of the dents are mostly hammered out of the body panels and any rust repair is done, the exposed areas get prepared for a coat of epoxy primer.

For Project Playboy I worked on the body shell first, stripped the previous work from the surface, worked on dent removal and rust repair, then prepped everything including the interior and engine compartment for the epoxy primer.

I’ll continue perfecting the metal on the rest of the panels, apply the sealer attach all the panels to the car and then begin working with body filler.